We hope all of you are having a wonderful holiday season, and looking forward to having some time to spend with your friends and families. As you know the holidays of Christmas and New Years fall at the end of the week in 2020. Our shipping partners also have an increase in demand due to holiday shipments. CurrantC has decided it is best if we hold of of on shipping frozen products until after the holiday season is over. We always want to ensure that you receive the best quality product If you place an order for them and you are in a neighboring state we will ship on a case by case basis. Sorry for the inconvenience. We are still striving to ship all other products in a timely fashion. 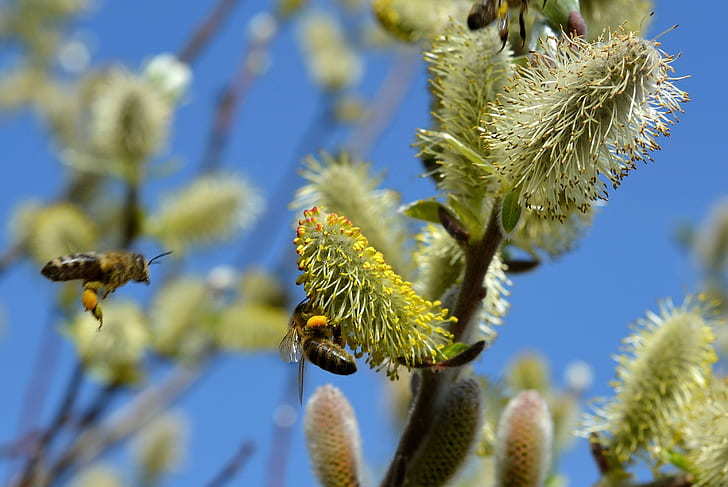 Spring has come in on the same rails as winter rode out. Winter was uncomfortably mild and virtually snowless and March, the month I usually refer to as “mud month” here on the farm, was just warm and all of the “spring things” are still predictably early. April turned cool and the farm has been kissed with over 2 inches of rain so far. A big wet kiss!

The weather and climate are one of the first thing farmers think about most days. It’s the variable that affects almost everything on the farm.

The currant plants are leafing out nicely and will soon be in bloom announcing the little green berries that follow. My honey bees all survived the winter which hasn’t happened in many years and they got an early start on the season with March’s warmth. The workers, all female, jumped into high gear at the first sign of pollen. Pollen is the main source of protein for honey bees and the queen’s first meal of pollen in the spring signals her to begin laying eggs for the season. It takes about 21 days for a worker bee to fully develop from an egg and it’s important for the hive to have as many workers as possible when the nectar from the blossoms of fruit trees, bushes, locusts and more begins to flow.

One of the first plants to produce pollen are the willows. The ubiquitous pussy willow is a great source of early pollen. When that soft, furry catkin of the male pussy willow we all know so well blooms, its hundreds of anthers become tipped with wonderful, bright yellow pollen which the bees can smell from 2 miles away. In addition to providing a abundant, early sources of protein for honey bees, the 500 plus varieties of this willow plant family have held an important place throughout human history.

The number of different uses of Willow is astounding. The strong but pliable twigs and branches of the young willows, called osiers, are idea for use in baskets, wicker, cane for the seats of chairs and the bark was used to tan hides. The wood is notably easy to bend without using steam when green. Willows contain substances which act as antibacterial. Add a stem or two of fresh willow to your cut flower arrangements to prolong their life.

Willows canes were vital for building very small, often one passenger boats called coracles (from the Welsh, cwrwgl). These were made from the strong willow branches and covered with leather. It was in such coracles that missionary monks from Ireland traveled to Wales, Cornwall, Brittany and around Scotland to Northumbria in the 7th century. It’s said they even reached Iceland in these tiny vessels around 1000 AD, a voyage of over 1200 miles. These Coracles are still used for salmon fishing in both Ireland and Wales today.

My favorite story about the value of the willow, however, goes back to about 440 B.C. Hippocrates of Cos, the father of medicine had, as the story goes, hypothesized that if one could determine the geographical source of an ailment, nature would have provided a botanical cure in the same location. One of the most familiar afflictions then, as now, was the common cold with all of the usual fevers, inflammation, aches and pains. He deduced that colds were most often brought on by exposure to damp, chilly environments so he began exploring the flora around ponds, streams and wetlands. Since willows are found throughout the world growing in these types of areas, it didn’t take him long to discover that boiling the bark of the plant produced a tea that greatly helped to reduce fevers and inflammation and ease pain. The botanical name of willows today is Salix and the magic compound he discovered, salicin, was named after the genus. Today we know it as salicylic acid…..aspirin.

Hippocrates may have been the first person to write his findings down but here in North America, perhaps even before the Greeks, the Alabama, Chickasaw, Montagnai, Pennobscot and probably many other Indian tribes used the willow to relieve fevers, aches, and pains, and there’s good evidence that the Hottentots of southern Africa have used it for the same purpose for centuries.

A few days ago, on the morning following a big rain, I sat over my first cup of coffee at the old harvest table in our east facing kitchen thinking about bees and pussy willows and the riches of the farm. The 6 acre wildflower field across the lane from the farm house began to slowly reveal itself as daylight crept down the hill. Inch by inch, the first rays of sun ignited the billions of drops of liquid clinging to the tips of the newly emerging plants that would soon burst into flower. The whole field burst into a shimmering fantasy. I took my coffee out onto the porch and slowly, decadently inhaled in the cool, damp, rain cleansed air. You could almost hear plants stretching and leaves unfolding. Three white tail does suddenly hopped from the woods over the old stone wall half way up the field. Two were yearlings and the larger doe was heavy with this year’s fawns. As though enjoying the new wet earth, the young ones raced each other up the hill and back down over the glistening, spring green carpet, white tails erect with excitement and joy. In C.S. Lewis’ autobiography, “Surprised by Joy,” he wrote “Joy is the serious business of heaven.” At that moment, on that porch, immersed in the farm spring, I also found myself, Surprised by Joy.

Once again, I can’t thank you all enough for your continued patronage and helping us keep the Currant Farm alive and well and our employees working by enjoying the incredible health benefits of Black Currants. My thank you this week for all of our invaluable customers is a free jar of the most amazing sweet/tart Black Currant Jam you’ve ever tasted with every order over $50. Thank you!

Cheers from the farm,